Remember Who You Are: A Lion King Movie Review 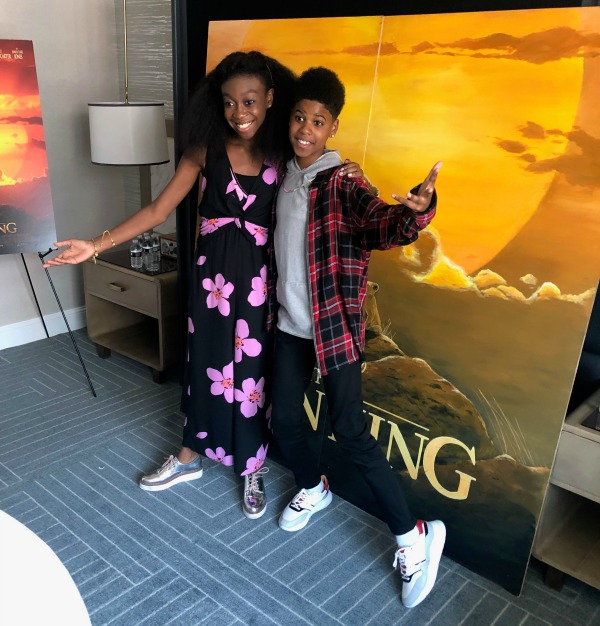 The first thing we wanted to know was, how did you find out that you’d landed the role?

Shahadi: We were sitting at breakfast, my family and I and we got a call from my agent and her assistant was like really happy for some reason… So my agent screamed on the phone and said, “you got Lion King!” And we were just so excited and jumping around, it was so exciting. It was literally my first feature film that I’d ever gotten so it was really exciting.

J.D.: It was very exciting actually. My mom got the call, she had a business call, and then she got off the phone and looked at me and said, ‘hey, JD, you got a role for Lion King the Movie’ and I was like WHAT? I won’t recreate it because I was screaming too much *laughs*. But, I was really happy, we prayed about it, we thanked… we Thunk God. I was happy about it, we threw a party. It was great.

Q: What was it like spending time with the rest of the cast?

Q: Were you able to spend time with Beyonce?

Shahadi: Only for like two seconds. It was backstage before we were going to walk out for the premier. We had been talking and I’d already met the rest of the cast except for Beyonce. We just had a really great time.

Q: What was the difference between working with the cast on this film versus when you were on Broadway and the relationships you had with those actors?

Shahadi: I mean, broadway is really really structured and you kind of just have to follow the directions that the casting directors give you, but doing this version, we got so much freedom from Mr. Jon Favreau. He kinda was like, just be young Nala and young Simba so we didn’t have much direction to take but I think he really enjoyed our performances. it was really really great. He kinda just wanted us to be ourselves.

JD: I was never on broadway *laughs*.

Q: Did you find it more, less, or about the same regarding the difficulty connecting with the characters?

Shahadi: Hmm… Slightly more challenging because I’d never done voice acting before, so this was my first time. It was really really exciting. I think that there was only like… no… it wasn’t challenging *laughs*.

JD: It wasn’t hard at all, I don’t really dress up as Simba in my spare time. It wasn’t that challenging. I didn’t have to change my voice or anything. It wasn’t too hard just being Simba. I could relate to him a lot.

Q: Since this was your first voice acting situation, was there anything about the process that surprised you?

Q: Did you guys know each other before you got these roles or did you meet as Nala and Simba?

Both: We met as Nala and Simba.

Q: Was there a particular scene or song that you were excited to recreate or put your spin on?

JD: I would say that one, but Hakuna Matata was really fun also.

Q: Did you sing along when you saw the movie?

JD: I didn’t because I didn’t want to bother anybody… I would sing but my dad was looking at me like “don’t sing. don’t embarrass me” *Laughs* 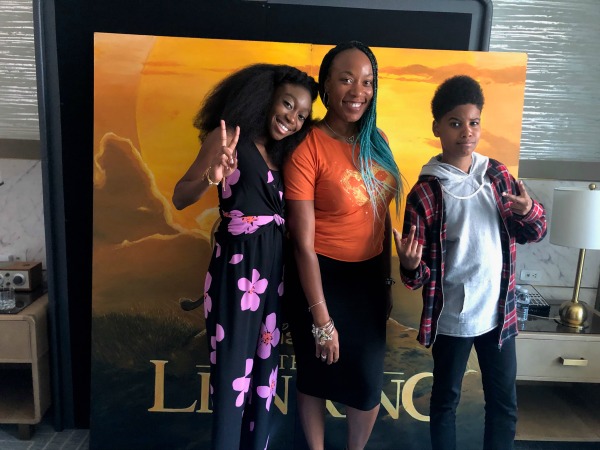 Q: What has been your favorite part of this entire Lion King experience?

Shahadi: I think that my favorite part of all of this is traveling and doing all the press and stuff. That is really fun. We get to talk to all of these media websites and it’s really cool.

JD: My favorite part of being in The Lion King is well… it has a lot of benefits, but I’ll say traveling too.

Q: How has this experience differed from your experience with Little (JD) or ‘Us’ (Shahadi)?

Shahadi: I think because I’m in the Lion King now, I can kind of just be a kid. I’ve been watching the Disney Channel and Disney movies all my life so I just have to reiterate what I’ve been doing so far so it’s pretty cool.

JD: There’s a pretty big difference. You don’t’ really travel much with Little but The Lion King has a press tour and all this cool stuff. Little was cool being in, it was a lot different recording it because you saw my face, I had to stutter… I don’t stutter in real life. So doing that was cool. It was just really cool being there.

Q: What’s next for you guys?

Shahadi: I have a single out called ‘Skin I’m In‘ and that just got debuted by billboard a couple of days ago.

The Lion King roars into theaters on Friday, July 19. Are you gonna check it out?

Let’s chat in the comments or on social!  FB | Twitter