Movie Review: Why Beyond The Lights Went Beyond my Expectations

Last night I had the pleasure of attending a screening of the upcoming movie, 'Beyond the Lights' starring 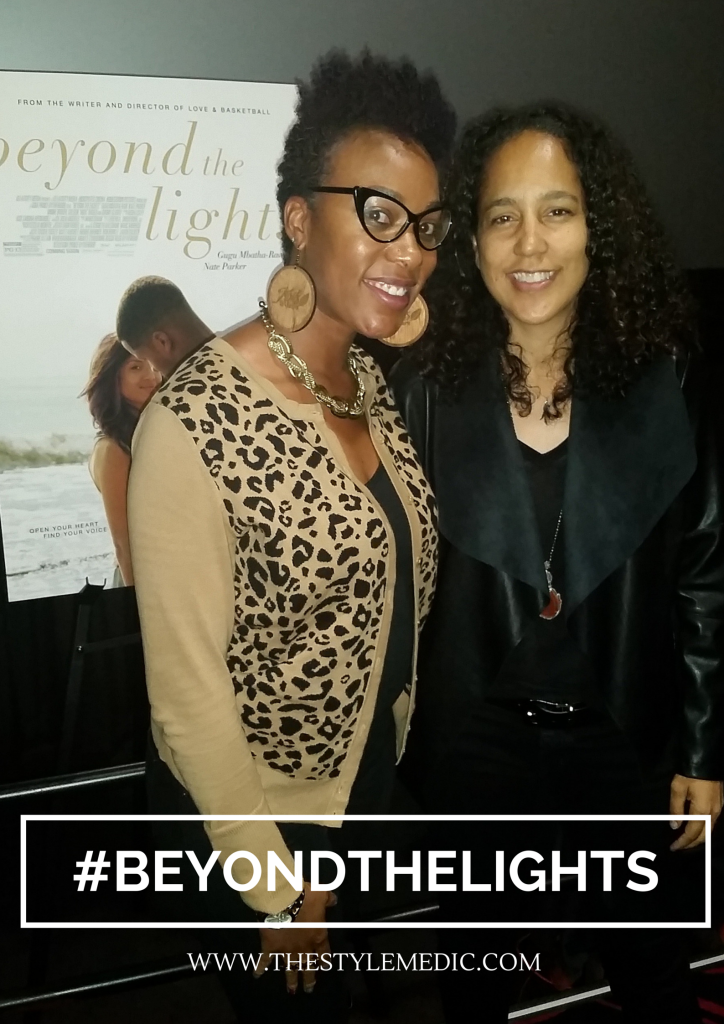 Posing with ‘Beyond the Lights’ director Gina Prince-Bythewood

Gugu Mbatha-Raw and Nate Parker. I’d seen the previews and was only mildly intersted in checking out.

When I found out that the director, Gina Prince-Bythewood is the genius behind one of my all-time favorite movies ‘Love and Basketball’ as well as the Secret Life of Bees, I was definitely more interested.

Here’s a little bit about the movie:

“This is the story of Noni, the music world’s latest superstar. But not all is what it

seems, and the pressures of fame have Noni on the edge – until she meets Kaz Nicol, a young cop and aspiring politician who’s been assigned to her detail. Drawn to each other, Noni and Kaz fall fast and hard, despite the protests of those around them who urge them to put their career ambitions ahead of their romance. But it is ultimately Kaz’s love that gives Noni the courage to find her own voice and break free to become the artist she was meant to be.”

If you’re expecting a Love & Basketball sequel you won’t find it here. Don’t fret though. This movie is good. Like, really good. Gugu Mbatha-Raw and Nate Parker have a palpable onscreen chemistry and the story is not at all predictable. I loved that this story is not just about a pop star, but about two people who are trying to find themselves and happen to find each other in the process.

Even though the characters in the movie were younger than I am (not a WHOLE lot though), I was able to relate to what they were struggling with, feel their pain and celebrate their victories. Just like Love & Basketball, this story will take you on an emotional ride and renew your faith in love.

The story also plays out on a dope soundtrack featuring Beyonce and Rita Ora and with heavy influences from the Princess Noire herself, Nina Simone.

Beyond the Lights hits theaters nationwide on Friday, November 14.

What say you? Are you planning to check out Beyond the Lights?

Come back and let me know what you thought!

*Edited to add*  Then this happened!!!

Oh, you know… Just chattin' it up with MGK on HuffPost Live.