This past Tuesday, my kiddos and I had the opportunity to attend a screening of the new movie: Teen Titans Go! To the Movies. Now, I know a little bit about Teen Titans Go! but only because my kids are such big fans. I’ve never watched the original Teen Titans, however (which apparently has a serious cult following).  Anywho, I knew my kids would love it so off to the theater we went; with the understanding that THEY were gonna be responsible for this review. Hey, it’s only fair.

Here’s a little about the movie:

“It seems that all the major superheroes out there are starring in their own movies — all but the Teen Titans. Robin is bound and determined to remedy that situation by becoming a star instead of a sidekick. With a few madcap ideas and a song in their hearts, the Teen Titans head to Hollywood to fulfill their dreams. Things soon go awry, however, when a supervillain plans to take over the planet — putting the very fate of the young heroes on the line.” 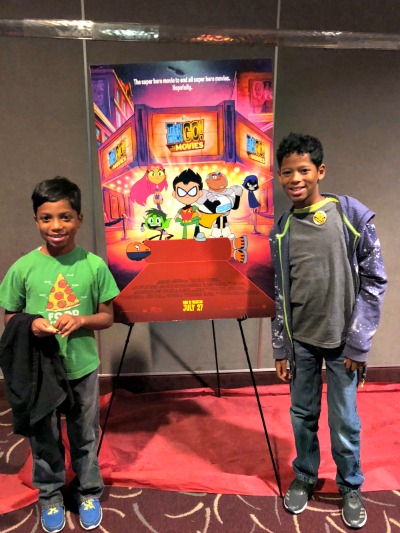 Who was your favorite character & why?

X (Age 10):  Robin. Because he didn’t give up on trying to beat Slade and make him his archnemesis.

What was your favorite scene in the movie?

X: When the challengers of the unknown where stuck in the void and the superheroes were sent there and attacked them.

G: When beast boy popped the giant balloon guys butt and it looked like he was farting.

Do you think there were any lessons to be learned from the movie? If so, what were they?

X: I think the lesson was to not give up on your goals.

G: Yes. Never be tricked by your enemies. Also, when the Teen Titans were fighting Slade, they were being brave.

Overall, what did you think of the movie? Do you think your friends would like it?

X: I think it was a very good movie; It made me laugh a lot. I think my friends would like it.

G: I thought it was funny. Yes, my friends would like it.

There you have it. They pretty much laughed the entire time and maybe even learned a thing or two. As for me? I chuckled a few times and didn’t fall asleep. After a full day of work and drive into the city, I consider that a win.